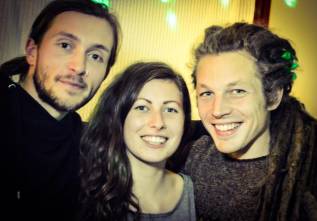 So this is the first Blogpost on ArcherandTripp.com. It naturally makes sense to be about how ‘Archer & Tripp’ happened:

September 2014 – after playing Hang for eight and a half years already I (Jaron) am finally coming out of my shell, attending my first ever Hang gathering – HangoutUK.

A year before (2013) Samantha attended for the first time, after having her ESS AsaChan ChanDhra since May that year. I’m having a great time, although a little overwhelmed by so many faces only known from the internet beforehand, it is an honour and my pleasure to play the last Saturday night slot. Then after an amazing sunday with many jams and beautiful encounters, it happen to be Rob Senior, Samantha and me being the last ones watching the fading embers in the communal fire pit, us three being somehow specially connected both in music and human nature. Monday morning comes and as I wake up nearly everyone! is gone except Sam and Rob who actually wake me up to say goodbye.

Since this trip was my first time to the UK, I roam around the english southwest and Wales for a few weeks, soaking up the nature and enjoy feeling little when facing sites which have been set up by our ancestors thousands of years ago. Finally I am drawn to Stoke-on-trent to where Sam invited me to play more music with her and Rob. We end up spending an intense week with some of the best music everyone of us ever made – it was clear that nice things will grow…

While Rob is occupied working hard to fund his future trips, Sam and me find that we’re also drawn to each other in certain other ways and the idea of merging our traveling plans is inevitable. So after a month of sorting stuff’n’things, getting ready for the road (as for example cutting my beloved self-made berimbau into three pieces only to connect it again with copperpipes so that in the demounted way it fits in my backpack) we are good to go, heading from Amsterdam to Melbourne in mid January, 2015.